A recreational lake in the Mallee

One of the side trips on the Mallee Highway silo  photoshoot in Victoria was to look for, and scope,  edgelands around Ouyen to continue part two of the project.  I did this on the last day  when it was bright and sunny and of no use  to me for  taking photos of silos with a large format camera. Bright and sunny is normal in the  Victorian Mallee, with overcast days being the exception. From my travelling around I could see that the Mallee is a specialist grain growing areas diversifying from livestock production (sometime in the 1980s).

I spend the Wednesday morning driving around the boundaries of the town and I stumbled on this behind the golf course just over a kilometre form the centre of town: 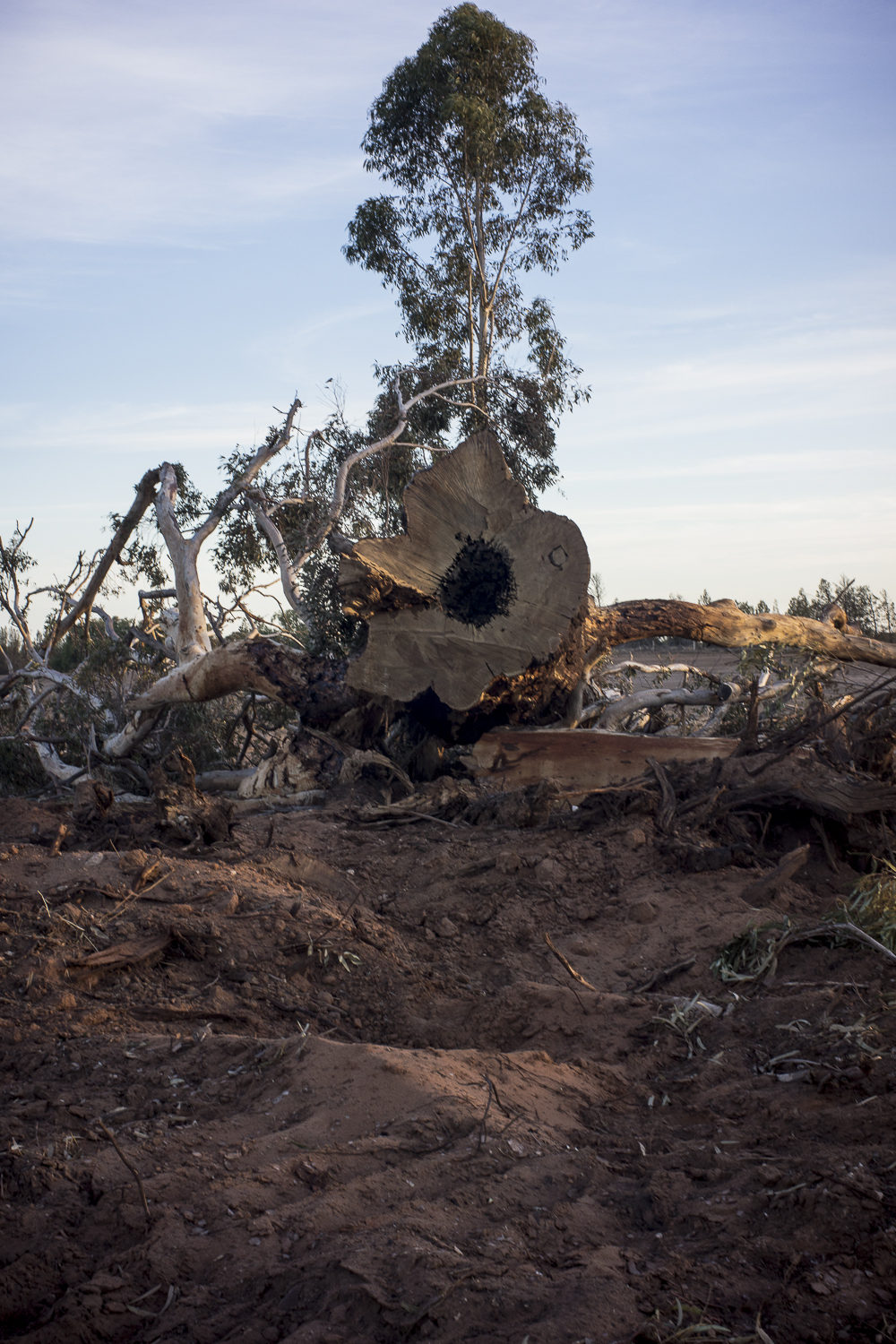 It wasn’t private land so I  wandered around to  have a look. The trees were being felled so that  large basin could  be dug out.  I kept on walking around to discover why a basin here.  A  sign lying on the side of the road said that this  basin that was  under construction was for a man made recreational  lake. It’s ambitious as it 700 metres long by 200 metres wide, with a depth of five metres when full, and  it will cover about 14 hectares.  Now the Mallee is very, very dry, very flat and low lying  There is no natural standing water within 100 kilometres of Ouyen—no lakes, no dams, no ponds, creeks or rivers. Ouyen depends on the Northern Mallee Pipeline to deliver both security of supply and quality by connecting the surrounding  towns and farms to the Murray River 100 kilometres to the north. 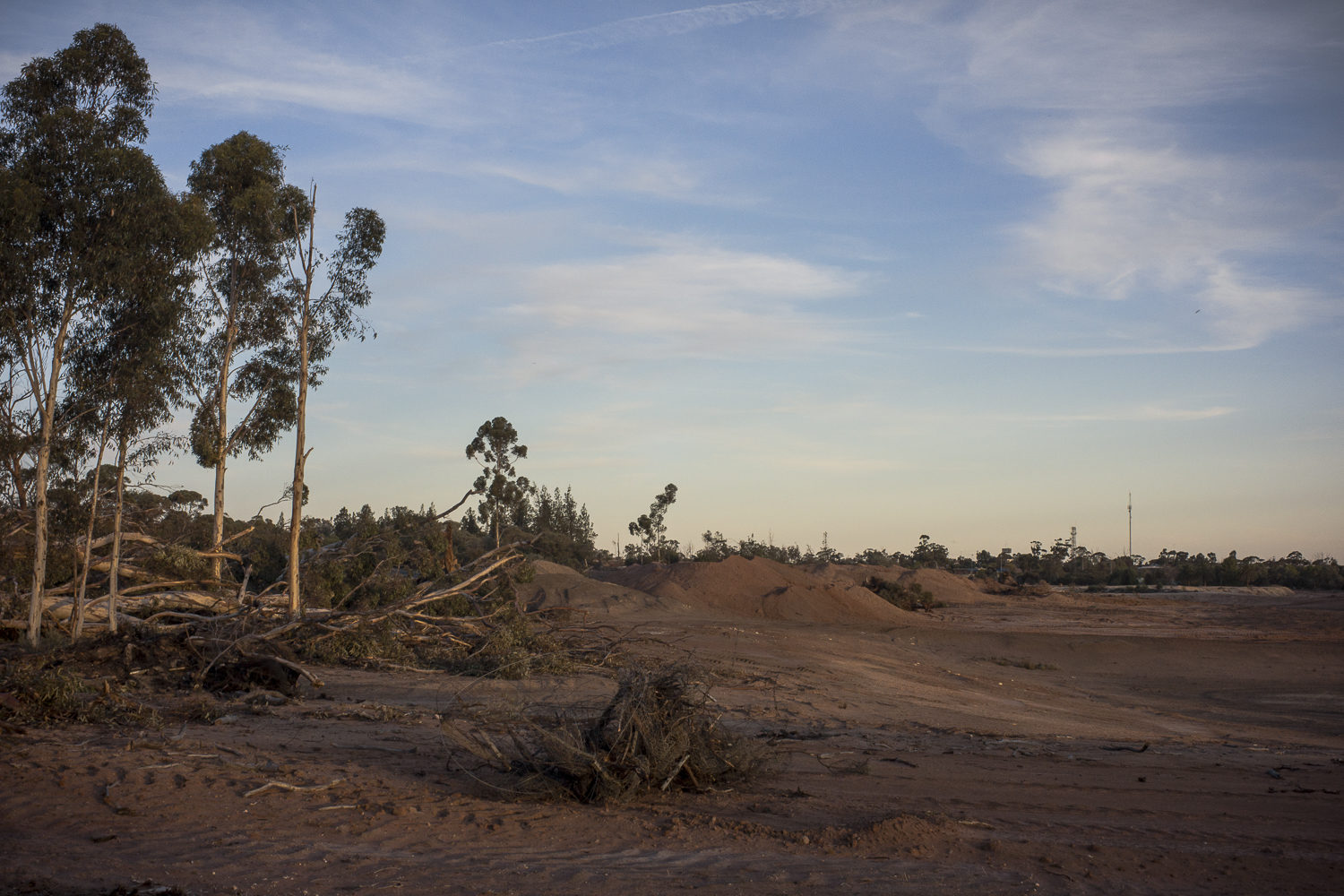 This was edge lands in transition. So I went back in the late afternoon and took some photos with the Linhof 5×4. No one seemed to mind. They wanted a recreational lake for their lifestyle and social amenity  to attract  tourism to the town, and boost the local economy.  The lake would be the centre of social life all summer long,  and in the Mallee it is a very long summer. The reasoning goes that it is  was only fair that Ouyen has a lake given the lakes in the Wimmera.  The water would come directly from the River Murray via a retrofit  to the Northern Mallee Pipeline,  rather than  from recycled water  from the township.  The evaporation rates would be very high.

This extra water diverted from  the Murray is at a time when there is a struggle to ensure greater environmental flows  for  the river. That is, water recovery for six significant ecological assets first identified by the Murray-Darling Basin Ministerial Council in November 2003: the Barmah-Millewa Forest, Gunbower and Koondrook-Perricoota Forests, Hattah Lakes, Chowilla floodplain, the Lindsay-Wallpolla system, the Murray Mouth, Coorong and Lower Lakes, and the River Murray Channel.

Presumably, given the cap on long term diversions from the River Murray in Victoria,   the reasoning is that the water saved by piping the old open channels–thereby reducing evaporation and seepage– can be reused  to create an recreational lake at Ouyen as well also making water available for environmental water releases in rivers within the region.