We are back in Australia in mandatory self-isolation after our time in New Zealand. We are in a bunker–a pleasant one- and we remain here for 14 days in response to the  coronavirus pandemic.We now live in a world where, in the short run, we must live as if we are infected. Every social interaction contains the possibility of death. Dodging bullets in public. It appears that the culture of progressive modernity, that we have only unending development and improvement to look forward to, has been upended. .  The masked figures everywhere on our news feeds constantly remind us of the LNP’s appalling fiasco of letting infected passengers from cruise ships go unchecked into the community; the evidence of a biosecurity collapse at airports and the way  that Border Force and federal quarantine authorities dropped the ball.  The LNP was the political party whose 10 years political rhetoric was ‘stop the boats’ and they couldn’t stop the one boat–a cruise ship– that mattered.

The first part of the trip in New Zealand was for me continue to photograph in Wellington and then to attend PhotoBook/NZ 2020. The second part was a two week holiday with Suzanne in the lower half of the South Island. Apart from walking inWellington I walked around the cities of Dunedin and Oamaru and then day walks around Lake Manapouri and on both the Hump Ridge Track and the Kepler Track when we were exploring Fiordland.

We arrived back in the midst of a Convid-19 pandemic with a vaccine over a year away and the LNP government belated  jettisoning everything it ever believed about free markets, “sound” public finances, efficiency dividends and austerity to reduce the deficit to assume command economy powers to deal with the public health crisis it was slow to address. Too little, too late.

The walking in Wellington, Dunedin and Oamaru took the form of urban drifting—a dérive-poetics without goal or horizon, even though my time in acacia of these cities was short. The urban walks were made in the spirit of Walter Benjamin (who advised travellers to foreign cities to learn to lose their ways) with drifting,  being something akin to a non-logocentric way of mapping and understanding the world.

I have spent the last couple of months working on the Reconnections: Walking Wellington  project. This  is  based on my walking  Wellington around the time of Photobooks/NZ  in 2018  and on my previous visits.  These visits were designed  for me to walk Wellington.

It has  initially been constructed in the form of  a Tumblr blog.  The blog is here and the project starts from the bottom of p. 4.   The impetus for the project was    Photoforum NZ’s recent open call for submissions  for their online gallery  (images of the project only),  and then their call for  submissions the form of a pdf  for their publications programme (text plus images).

The blog was the easiest way for me to construct the project fragment by fragment,  and it is also provides an  accessible way for people to see the project in its embryonic form. The picture below  is an outtake from the project: 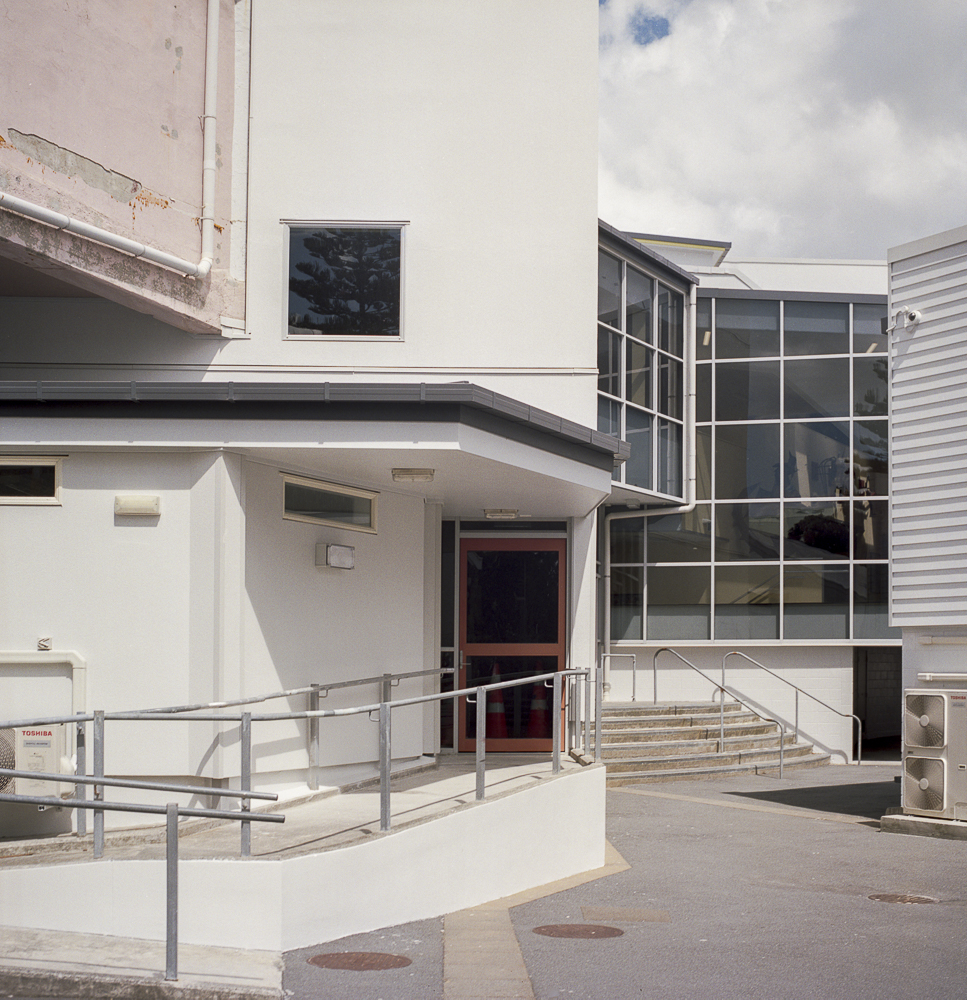 There is another outtake here.  Another  outake  is here.

If these submissions are not successful– I am assuming  that they wont be,  given both the nature of publishing in Australia and New Zealand and the strength and creativity of photography in New Zealand —then I  have the basic draft  for a new photobook. This time around I will submit the pdf to various book publishers. If I am not successful,  then, and only then,    will  I consider publishing  it on my own.  I do need to explore the submissions route and experience the normal  series of rejections.   END_OF_DOCUMENT_TOKEN_TO_BE_REPLACED

I am participating in the Photoforum Members Show at Studio 541, Mt Eden, Auckland,  New Zealand. I rejoined Photoforum when I was at Photobook-NZ in Wellington after several years absence.   I submitted 3 images (medium format,  colour negative film)  for inclusion in the Members Show, which were made when I was   walking Wellington on a recent visit. The exhibition was oversubscribed,  so  the  curators/organizers  reduced the three images to two. However, it was only due to the stirling work at very short notice  by the team at Atkins Photo Lab in Adelaide that I was able to get the images printed, framed and couriered to Auckland.  We had a week to do it.

All  the images in the Photoforum exhibition are posted on  Studio 541’s website along with  the bio’s and artist statements.    These show a diverse range  of work that stands in opposition to, and digs beneath,  the NZ is beautiful or a paradise  school of photography. 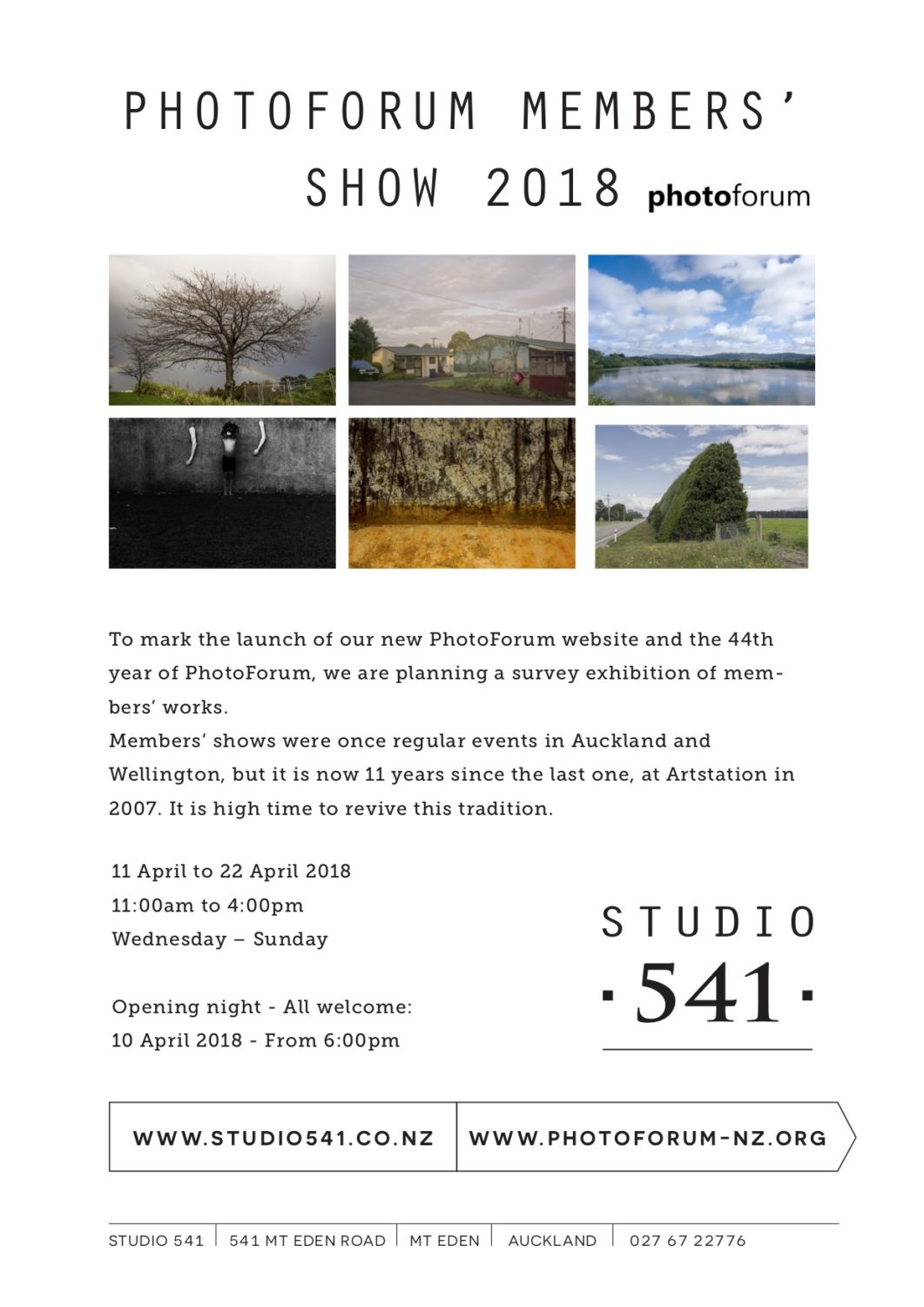 Photoforum  was co-founded in  1973 by John B Turner,  Tom Hutchins and Max Oettli to promote photography as an artistic and expressive medium, to encourage co-operation and collaboration amongst the photographic community, and  to provide mentoring  for photographers.  A secondary, but crucial  aim,   was  to encourage photographers to actively engage in the public risk-taking of critical writing and curatorial practice, outside of the universities and polytechnics.

Over its 40 years history Photoforum  has also helped to  nurture a critical environment, but there is still a lack of  critics and historians to better cover the field of photography in New Zealand. My memories of the early years when I was a member was that documentary photography has been  the dominant  language of PhotoForum photography.There is nothing like this  community-orientated non-profit organisation, which   has made valuable contributions to New Zealand art and art history,  amongst the art photographers in Australia.  We independent Australian art photographers are much poorer as a result of not having a similar DIY community of expressive photographers.       END_OF_DOCUMENT_TOKEN_TO_BE_REPLACED

I made a quick  return  to Wellington just after my walking Wellington trip to take part in Photobook-NZ  book fair   that was organized by Photoforum in association with  the photography stream  of the College of Creative Arts at  Massey University and Te Papa.   I didn’t participate in the masterclass for   creating and publishing photobooks, nor did I submit a photobook for the New Zealand Photobook of the Year Awards.   I missed the talks by Bryan Schutmaat, Carolle Bénitah and Athol McCredie at Te Papa  on the Saturday as I had to mind my little stall in the   book fair   at Te Papa. The books on my  stall included Edgelands, Abstract Photography and Mallee Routes: Photographing the Mallee 2018.  Surprisingly, the book of mine that  people were the most interested in was the Abstract Photography book.

I  attended the opening on Friday night at Te Papa, heard  the  Peter Turner Memorial Lecture given by Jem Southam   on the Saturday night,  spend the Sunday at Massey University listening to the talks and panel discussions, reconnected with Sally Jackman (an old friend who I hadn’t seen since my time in Melbourne in the 1970s) on  the Sunday night,  and photographed around Newton on Monday.  I  flew back to Adelaide on Tuesday. All in all it was a wonderful and fruitful weekend. 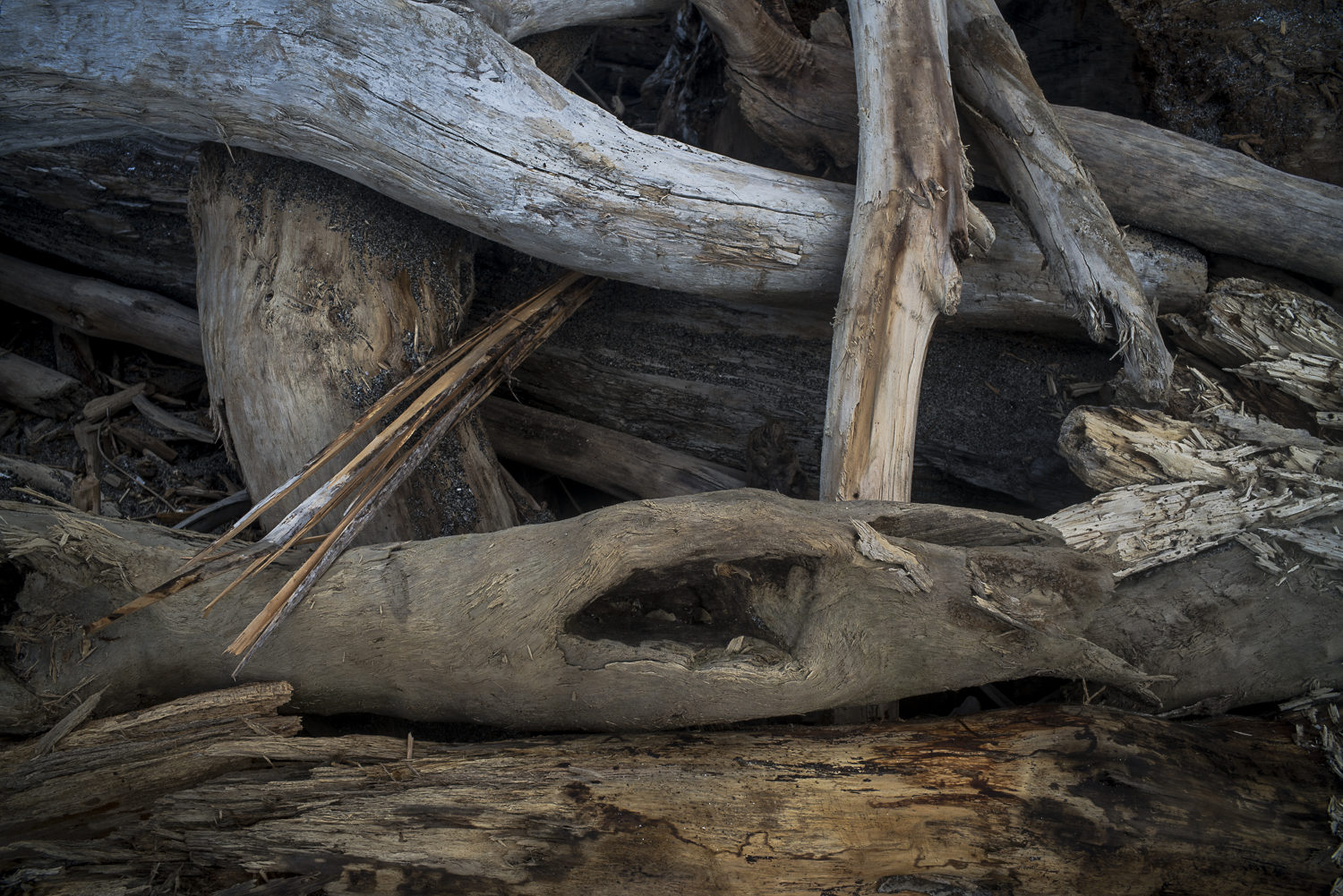 The highlight of the Sunday session  at Massey University for me was the  talk by Katrin Koenning, a German photographer now based in Melbourne. The talk centred around the ongoing  Indefinitely project, which is  about the space created by her  family’s migration. The notion underpinning this is  that this space is not a vacuum or a void, but rather the creator of new narratives. This grew out of an earlier project Near, which was about Koenning’s  migratory experience. What I found interesting in this body of work in her talk  was the emphasis on emotionality,  darkness, and strong contrasts between darkness and light  in her pictures. END_OF_DOCUMENT_TOKEN_TO_BE_REPLACED

In early March I spent a week walking  Wellington, New Zealand  as well as  photographing in the city,  whilst Suzanne walked the Grand Traverse,  Queenstown way with her Adelaide  walking friends. I had  studio apartment in the Aro Valley courtesy of Air bnb,  and I spent about 8 hours a day walking the city in a Situationist mode. I drifted through central Wellington with two camera bags on my shoulders: one containing a Rolleiflex (TLR) a  Leica M4-P rangefinder whilst  the other held  my newly acquired  Sony Alpha A7r111, which I was slowly learning how to use. 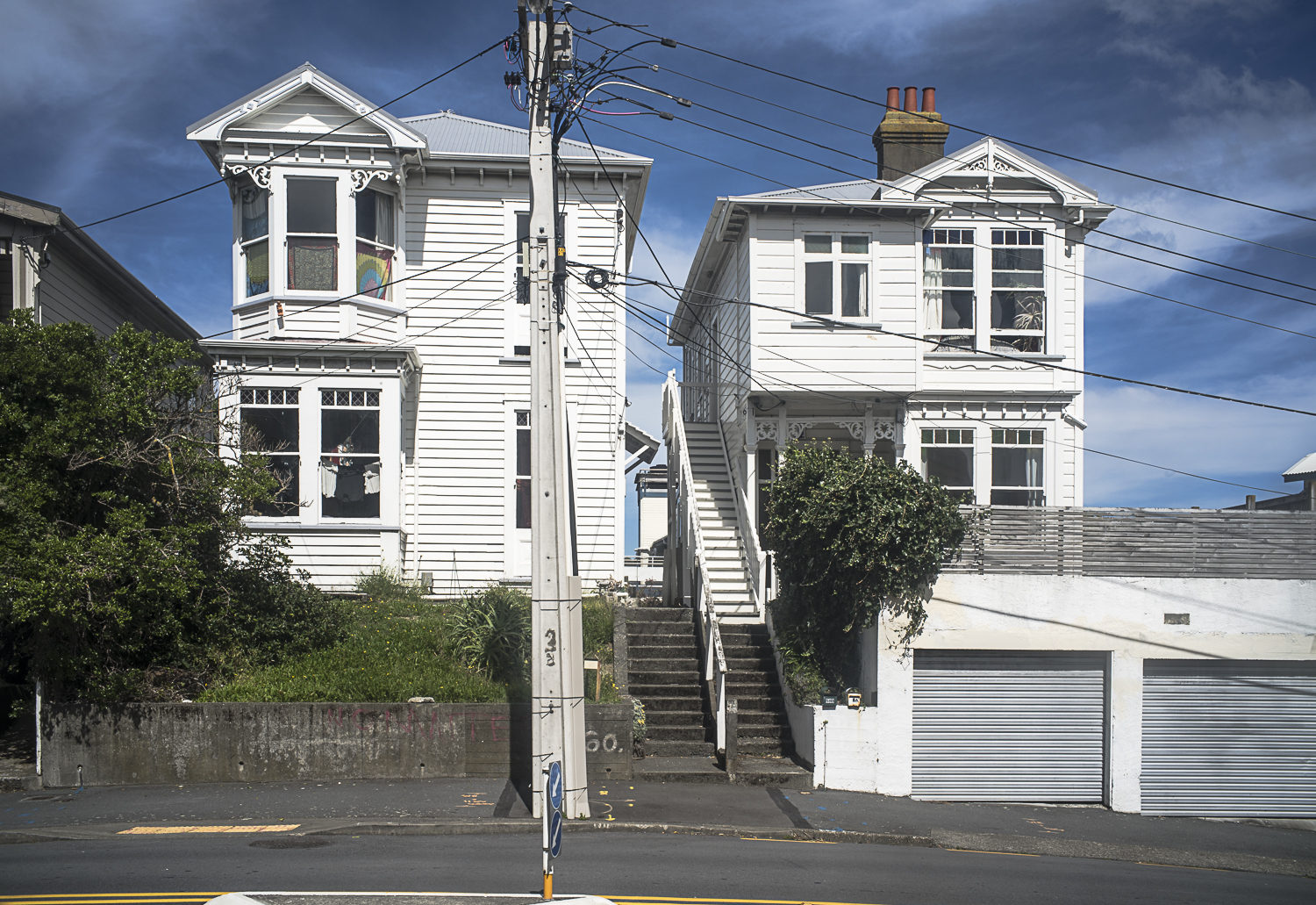 I loved Wellington. It’s a funky,  vibrant cultured city. I was so at home being there. Even though Wellington is  a much smaller city than Adelaide in population terms, it is so much more alive in an urban sense. Despite the revitalisation since 2013 of the central city and the liquor-licensing reforms  Adelaide remains a  doughnut city.  Wellington  was much more alive than it was when I worked there in the 1970s as an economist in the public service. Then it  was empty of life at the centre with little in the way of depth of character. The central city is a much better place these days.

Wellington  also has  a strong art photography culture  which, unlike Australia,  is connected to,  and a part of,  a literay culture.  There is also a  vibrant café culture with excellent coffee scattered amongst  the Wellington ‘walkability’.  The  funky changes in the urban culture happened  in the 1990s apparently, but I am not sure what the driving forces  for the city’s transformation were, given that Wellington is largely a public service town.   Was the emergence of a lively urban culture caused by  the acceleration of diverse migration flows? END_OF_DOCUMENT_TOKEN_TO_BE_REPLACED